Payback time … on your bike!

Way back when:
Life on a bike started for me around the lovely young age of 10, borrowing, well, stealing really, mums bike and going out on epic rides around Regents Park in central London and pedaling around on bikes way too big for me. 15 years and 3 stolen (from me) bikes later and on 30 cigarettes a day I found myself in Sweden, quit smoking, started cycling again, lost some weight (as you do) and gained some kids (as you do). 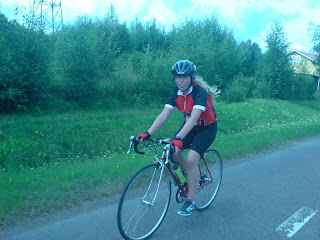 One of those kids on a training ride in Norrköping

Cycling benefits:
Now, as I sit here and reflect on the 2/3rds of my life that have passed by, I can note that the bike has played a massive role in my life, my surroundings and my well-being. I don’t think anyone can argue that the carbon-footprint left by a 100km ride is equal to that of driving your kids to school. ok, well there is one person that could and even would do that but he’s not allowed in here.
Physically, psychologically, socially and spiritually and in later years; Financially (Plus and Minus) and I am guessing that you the reader can note the same thing, as the chances are you’re a cyclist reading this. I do not get that much interest from Sumo-wrestlers.

To bike is to live:
On the back of a shitty cancer diagnosis it was the bike that was my saviour, my way out, my way back. Of course my family played a major pivotal role in this and supported me, giving me the room and the time I needed to do my thing, and when they did, it was to the bike I turned.
But it didn’t just pull me together … it pulled others together aswell and out of the fires of cancer I was riding to help others and with it the chance for anyone and everyone to do their bit, come together and “feel good by doing good”

What’s the damage John?: (London street talk for “How much?”)
In order to attain any level of consistency when cycling we need to plough money into our sport.
For bikes, parts, accessories, clothes, race-fees, meets, insurance, time, holidays, coffee and cake but perhaps mainly coffee …. infinite cups of coffee … and each and everyone one of us is in some way consumed by the hype, the forums, the Tour de France, the coffee, the TV-broadcast, the magazines, podcasts,  the rumours, the struggles, the sweat, the controversy, the winners and losers and the joy: The Joy of cycling. What an amazing community we live and breed in.
How many people outside of cycling go for a coffee with friends in the middle of a 4 hour workout?

How much joy doesn’t this sport give you:

Whether it’s listening to Roberto Vacchi excitedly running through the last 500 meters of a group sprint on the Tour, or jumping on the bike to ride to the shops, cycling gives and continues to give.
Unfortunately however, our beloved ‘wheeled’ friend is lying in the wasteland, all but forgotten by Politicians and city council planning members … or is it. For surely, ‘times they are a changing”.

Town planning for the cyclist:
Undoubtedly it’s improving, it has to, cycling has boomed both as a sport and as a way of commuting to work, school, the shops. More and more initiatives are being taken.
In the 90’s in Norrköping, 3 of the 5 main roads out of town were made inaccessable to cycling thanks to the 2-1 roads. Only to be ridden at your own risk.
Now cycling paths are finally being added to these (don’t know why they weren’t added in the first place) and again, although it is improving, more needs to be done. Specifically within the city centers.
If we build more parking for bicycles in centrally located positions and less for motorised vehicles then the poplulace are going to get the message and hopefully start biking more right?

What are you and your town doing to help?
Cyclists have been the seagulls of the commuting society on the rubbish-dump picking for scraps. The bigger the dump, the more birds it attracts, and at somepoint someone is gonna want to clean up.  There are loads of competent people out there that are doing what they can and have been trying to do it for years. They cannot do it on their own and somewhere along the line the cycling community needs to change gears and give them a hand.

Payback:
That’s why I’m thinking a little payback is called for and I’m gonna give what little I can back by supporting an organisation that has been around for a long time and has over recent years started to act more and more for the benefit of all that sit on a bike. An extra few kronor here will do some real good, not just for me but for all who bike and perhaps others will do the same.
I joined last year and just this week sat in on a meeting, the soul purpose of which was to help adults from other countries to learn how to ride a bike.

Sound basic? Well it is, and it isn’t. If you’re 30 years old and never touched a bike it’s not as straight forward as you might think. A lot of time and effort has gone into producing a well-thought out manual on where to start and then how to progress.

Bicycles have been procured, helmets aswell and a storage facility very close to where one of the members lives. Pedals are removed and the first steps are taken. Literally steps.
Now! Knowing what YOU know about riding a bike. What it gives you, the feeling when you push off and set out to the shops, or that ride around a lake with friends. Imagine then the feeling of exhiliation that these guys and girls will feel the very first time they do it. What a rush!
I’m quite jealous 😉

So why not read up and give this organisation som support and become a member. They are even looking for cycling instructors all over the country to help with this project.
If we don’t, then who?

Footnote:
Vätternrundan #3
1992 VR saw fewer registered riders for only the second time in VR’s  history, no doubt due to the atrocious weather the year before. Yet this year also had the second highest amount of finishers to date, no doubt thanks to the great weather we had. And I remember absolutely nothing of it. WHat I do remember was thinking ok, what next, 4? Sure, but 4 means 5, cause I’d be silly to stop on 4.
So now I was committed to the next 2 years.